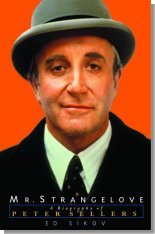 Mr. Strangelove is the first American biography of one of the cinema's greatest comedians. It's the story of a screamingly funny, desperately unhappy soul - a man who thought he was empty. Sellers, who could mimic anyone and don any mask at will, was privately convinced that his personality had no core - that there was no personal substance under the put-on characters he so readily and hilariously assumed. The Goon Show made him famous; the Pink Panther films made him rich; Lolita and Dr. Strangelove gave him artistic respectability; I Love You, Alice B. Toklas and What's New, Pussycat? turned him into a 60s flower-power icon that still resonates today.... And yet Sellers - whose blistering improvisations could ruin takes by sending the casts and crews of his films into peals of uncontrollable laughter while the camera was running - remained confused and lonely, difficult to work with, volatile one minute and torporous the next.

He worked with some amazing stars, from Shirley MacLaine, Sophia Loren, Maggie Smith, and Goldie Hawn to Shelley Winters, Ringo Starr, Elke Sommer, and Claudine Longet. And he made films with such talented, voluble directors as Blake Edwards, Roman Polanski, Paul Mazursky, Billy Wilder, and the late Stanley Kubrick. As hisPink Panther director Blake Edwards describes him, "Peter was a mercurial clown who could get you laughing one minute and cut your heart out with a bloody ax the next."

"Sikov has pulled off a difficult trick of producing both an authoritative biography and a compulsive page turner."
- Michael Palin, The New York Times Book Review

"Sikov's fair-minded, thoughtful, and honest look at [Sellers] may be all the understanding anyone will ever have of the strange comedian, and, in fact, is probably all anyone needs."
- Jeanine Basinger, Washington Post Book World

Ed Sikov is a film scholar, author, and lecturer.

Ed is the author of seven books, and numerous essays in anthologies and publications. His most recent book, Film Studies, was published by Columbia University Press.