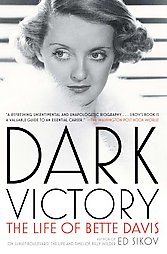 All About Eve, Now, Voyager, Jezebel, What ever Happened to Baby Jane?.... Bette Davis' films are legendary. Davis herself transcends them.

She was magnificent and exasperating. Pretty enough to be given the star treatment in her early twenties, she developed by middle age into a weathered boniness graced by a slash of red lipstick. Elderly, crippled by strokes and weakened by breast cancer, she still compelled us to look, just as she compelled herself to keep acting. Some stared, some cackled, some didn't care anymore, but Bette Davis never stopped working. It was the only thing that really mattered in the end.

Dark Victory is a twenty-first-century rethinking of this titanic actress, whose centenary will be in 2008. Treating her films at least as acutely as she herself did - and often more admiringly - Dark Victory traces Davis's rise to stardom at Warner Bros., her powerful drive to wrangle and oppose, her bitter disappointments and sporadic moments of public triumph, her four failed marriages, and her strategies for continuing her career in the face of age and popular tastes. It covers Davis's films on an equal footing with her personal life because she believed in her work and her work was terrific. Dark Victory takes that belief as the starting point. She wasn't just a star but a gifted artist who changed the face of acting. This book respects her talent.

Headstrong and scrappy, Davis hacked her way through Hollywood's front offices and didn't much care who or what she chopped, all in pursuit of the essential truth of filmed fiction, an electric authenticity in which she never stopped believing. Davis could be radiant, but she didn't hesitate to make herself appear repulsive onscreen when she thought the role demanded it. She fought for the right to perform women as cruelly as she pleased, if that's what she thought her characters deserved. Bette Davis wasn't afraid to cause a scene, onscreen or off.

Ed Sikov is a film scholar, author, and lecturer.

Ed is the author of seven books, and numerous essays in anthologies and publications. His most recent book, Film Studies, was published by Columbia University Press.